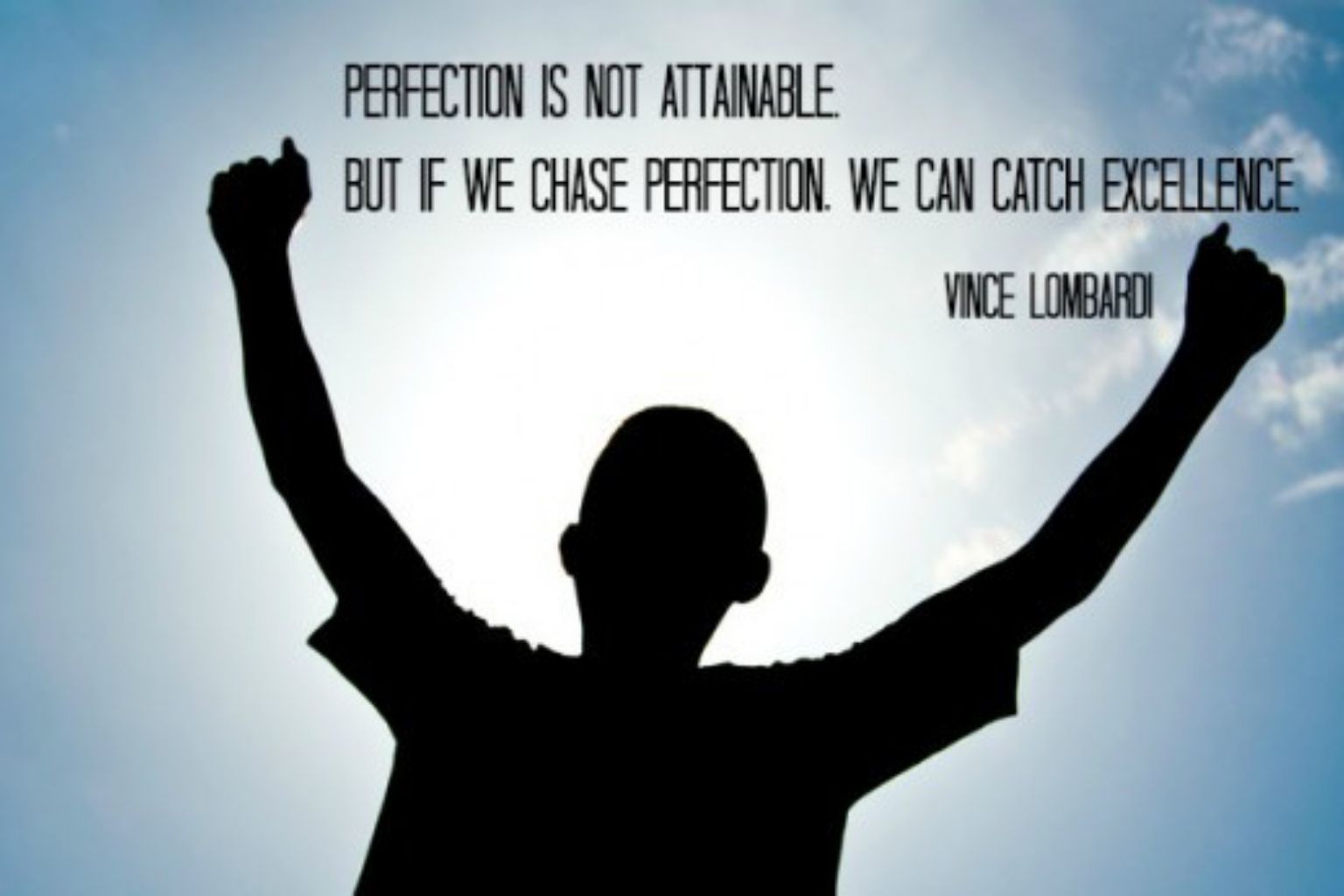 Understanding The Mindset Of Elite Athletes: Perfection vs Excellence

One of the skills of any elite athlete is the ability to set a goal. Often, one’s choice in the pursuit of an athletic career is born from the idea of attaining a monumental goal in sports: win a medal at the Olympics, break a speed record, or sail the Volvo Ocean race. Setting lofty goals is important, but it’s the process of how to attain that goal which yields success or failure and your enjoyment of the process. Quotes from sports legends, like the one above, often highlight the concept of ‘perfection versus excellence.’ Why can’t athletes aim to be perfect? If I am the closest to perfection I will win, right? While this logic isn’t wrong, it is a dangerous mentality that often leads to unhappiness and can actually stop progress towards a goal.

“Why can’t athletes aim to be perfect? If I am the closest to perfection I will win, right?”

As an Olympic campaigner, my first awareness of “excellence versus perfection” came during a discussion with the sport psychologist working with the US Sailing Team back in 2010. It also happened that my awareness coincided in a moment in my training where I was struggling with the demands of attaining perfection from myself and the negative results I was feeling and seeing. At the time, this philosophical struggle was really impacting my training and effecting my progress.

Perfectionism is the individual’s belief that he or she must be perfect to be acceptable or achieve the goal – a binary response to life with no gray area. Perfectionism is an attitude, not necessarily a behavior. Anything less then perfect is perceived as failure. This tends to cause an equally binary emotional response: I am the best or I am the worst. An athlete with a perfectionist mindset is focused on the outcome not the process. They judge self-worth based on achievement (looks, strength, results, etc.) and strive for external recognition of that achievement. These athletes tend to place unreasonable demands on themselves and are quick to criticize failures, which ultimately causes them to avoid failure all together. The perfectionist views other competitors, trainers, coaches as potential critics and as a result tends to avoid feedback, viewing others as adversaries. As athletes, we have all felt these polarizing emotions and wrestled with the idea that winning is perfection, which causes a real problem: the causal emotional and cognitive responses that occur in the perfectionist mentality effect the athlete’s developmental process. Athletes might temporarily derail from their processes or stagnate in their training during the darker emotional moments of this struggle.

“Excellence focuses on the process of achievement rather than the outcome.”

To combat the negative effects of pursing perfection, athletes should instead focus on pursuing excellence. The pursuit of excellence is the desire to hold oneself to a higher standard and to be the best that one can be without the demand attached to the goal or desire. Excellence focuses on the process of achievement rather than the outcome. Athletes in the pursuit of excellence practice incremental progress by setting small goals in their training; the aggregate leads to a better result. The mentality of pursuing excellence is also positively reinforces behavior and emotion: take a lofty goal, break it down into smaller manageable goals, focus on incrementally achieving those small goals over time, which gives fulfillment in the short term and leads to achieving the larger long-term goal! Who doesn’t like checking off items accomplished each day?!

Athletes who pursue excellence are often more successful than the perfectionists because they do not paralyze themselves with fear of failure, rather they are able to enjoy the process, and therefore, pursue more risks and goals increasing the chances of success.

“The pursuit of excellence is gratifying and healthy. The pursuit of perfection is frustrating, neurotic, and a terrible waste of time.” -Ed Bliss

Many elite athletes go through some stage of perfectionism (whether consciously or not). How that athlete manages that moment can alter the direction, path, and longevity of an athlete. In my own experience, it was only by having some perfectionist mentality that I was able to push myself toward a goal I might not have tried to reach otherwise. Many elite athletes likely have a similar story, but the best athletes are the ones that use their perfectionist experience to pursue excellence each day.

As an SPT Coach, I’ve worked with athletes from many different backgrounds and with many different goals. The best part of the coaching process is taking each athlete through this journey of awareness. Not only has the athlete benefited from this perspective, but I have as well on my own journey and pursuit towards excellence as a coach. In my personal journey as an athlete, coach, business owner, and husband, it is the times when I am fully pursuing excellence that I am the most fulfilled, which is all that really matters in this life anyway.

Carry on with your pursuit of excellence!

“We are what we repeatedly do. Excellence, then, is not an act, but a habit.” -Aristotle

Let's Make A Plan Together

Schedule a free consultation to discuss your fitness and nutrition goals.